It took me a while to accept that I am indeed a mystery novel fan. I really couldn’t go on denying it after ripping  thro 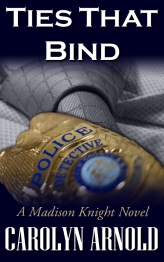 ugh it this mystery by Carolyn Arnold.  Her police detective Madison Knight is a fan of Hershey bars and working herself to the bone.  Like all good protagonists these days, she is faulted in an all too human way; hurt by love and life’s bitter realities.

The opening lines of the novel tell it best:

Someone died every day. Madison was left to make sense of it.

Detective Madison tries to make sense of unexplainable actions of murders. An impossible task, but she feels a responsibility to the victims’ families.

The realistic portrayal of how police work is done as well as the frustrations that come along with it; lab equipment breaking down, things going missing along with a boss who has unrealistic expectations.

Arnold’s narrative style isn’t flashy, but solid and well thought-out.  She creates a mystery that takes everyone by surprise and isn’t wrapped neatly at the end with a bow. Truthfully,  that is my main compliant with mystery novels when everything ends too perfectly. Real life is never that tidy.

It took some time for me to connect with Madison as a character but don’t worry the murder mystery plot will grab you and take you in as it did me.  Arnold mixes the voice of the good detective in most of the chapters with the voice of the killer sprinkled through out the book.  It was the killer’s voice that first grabbed me.  You know before Madison that he isn’t done and that the murders are more personal than first imagined.

Ties that Bind is the first book in the Madison Knight Mystery Series, the second, Justified has just been released on Amazon. Read more about Carolyn Arnold on her site – http://carolynarnold.net/