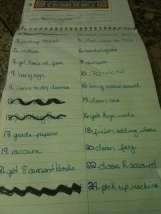 Today, probably by the time you read this, I will have already walked back into the cafeteria for the first assembly of the year.

Some might imagine that I have spent the summer break with my feet up relaxing at the beach, sleeping in and spending whole days in my pj’s.  The reality is that I spent a lot of time working, going to appointments and generally trying to figure things out.  The extra time hasn’t meant spending extra time with family or friends, because most of them are working or off on vacations of their own.

I want more time. I always want more time to do the things I never have a chance to do during the school year.  Most of the time I don’t accomplish any of the things on my grand to-do list.  This summer was better than most, but still there are things that won’t get done, which brings me to what I really did this break.

I learned to prioritize and give myself a break. My novella, Blood Child, was supposed to be finished and in the final stages before being self-published.  It isn’t done and honestly it may actually take another month or more.  The fuzzy robe that I was going to make myself is still waiting for me to cut out the pattern. The sewing machine that I borrowed is under the table whispering to me.

The to-do list under surgery for the second time in a year. This time things that I can not reasonably accomplish have been banned from being added to the list. The coming school year has spurred a growth in the list, but it is under control.  Everything that needs to be done will get done, some of it before school starts.

Back to school, back to my routine, back to the day to day inspiration of my students and my co-workers.

2 thoughts on “Back to the Grind”